THE HISTORY OF STRAIGHT RAZORS

Straight razors, which reached their design zenith in the early 1900's, have changed (to the untutored eye) very little since the late 1700's. Yet in reality they have changed a good deal - including the very steel they are made from. Handles (or, more properly, scales) have undergone changes in design and composition too. The differences are subtle yet significant and, for anyone wishing to better understand their chosen method of eliminating the stubble, can be appreciated. Below we give a brief, but by no means exhaustive, history of the straight razor.

The straight razor may be a simple tool but that doesn't mean to say it's crude. Far from it. The modern (1950-ish onward) straight razor (from here called a 'razor') is a distillation of design that has been evolving since about 1600. That's a long time. The reason the razor is a simple tool is one of refinement - modern razors may not have the collectability value of the ones made 100 years ago but we suspect they're now made of better steel.

Razors reached their design high point in about 1930 or so, in our opinion (that will be no doubt hotly contested). About this time the blades were made of the best steel around, the profiling of the blades reached a peak and - let's face it - they couldn't get any sharper. We have no doubt that this will have absolutely no effect on the desires of collectors (including us here at The Invisible Edge) so what follows is as objective as we can make it. We don't have examples of all the early razors to show you (yet) but here's a tour through time –

Razors looked like small hatchets and didn't have maker's names or any form of branding. It was as likely that these were made by the local blacksmith as anyone. What shaving was like with these razors is anyone's guess (perhaps that's why most men grew beards!) but they were used widely and were the forerunner of the straight razor as we know it.

Both blade and handle were wedge-shaped, the blade being wider at the point than at the pivot. The profile of the blade was a 'wedge' - no hollow grinding - and its edge straight. Blades had no tang as such and very often no 'monkey tail' (the curved 'trigger' piece at the end of the handle). If this was present it was short and stubby. Typical handle materials were horn, wood and bone, though tortoiseshell and ivory were also used. The handle surface was almost always flat, not curved, though handles (called 'scales' from now on) were sometimes bevelled. The pins at either end of the handle were sometimes of brass but generally made of iron. Razors made between 1740 - 1830 were sometimes marked with the words 'warranted' or 'cast steel' to show that this type of metal, invented in 1740 by Robert Huntsmann of Sheffield, had been used. By the standards of today the razors from this era look a bit crude - but they were the cutting edge (pun intended!) of their day. 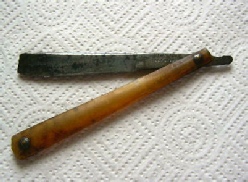 Cast steel razor by Clayton, C. 1780-1790. Notice the complete lack of a shoulder and no tang to speak of. Scales are horn. This used to belong to a Buddhist Monk - honestly. (TIE collection, NFS)

This period showed small but subtle changes. A 'shoulder' began to develop on the blade - forerunner to the stabilising piece - and the overall size became a bit smaller. Scales started to show a slight curve, moving away from the earlier totally straight handles. Decorative handles of pressed horn began to appear.

The biggest change in this decade was the discovery, by Michael Faraday, of 'silver steel' - the addition of silver to steel in a proportion of 99.98% steel to 0.02% silver - not much but it made a huge difference, if only to the appearance of the metal. The first signs of hollow grinding came in around 1825 and it took another 60 years to bring that process to its final stage.

Flutting, or 'Jimps' began to appear on the top and bottom of the tang to aid grip - 40 grooves per inch was the standard. During this period there was also a fashion for very large, wedge-bladed razors marked 'for barbers' use' or sometimes words like 'improved silver steel' but this only lasted ten years or so.

During this period English makers began adding a monarch's sign to their razors - this comprised a crown bracketed by the initials of the monarch, e.g. 'G (crown) R' for 'George Rex'. This at least helps to date these razors to a reign, as follows –

This period saw further development of the blade and the tang (the part of the metal that you hold!) became more defined from the blade. Etched blades were available and 'notched' blades were available. Silver steel more or less replaced cast steel during this period. Blade slogans such as 'Old English' and 'The Celebrated Razor' were common. Horn handles were also impressed with slogans and the scales (handles) became more bow-shaped.

Photo-etching of wedge blades became quite popular with some beautiful designs being produced: this continued well into the 1860's. 'Penning' - the method of patterning scales with silver pins - also became popular. Some used hundreds of pins and the patterns were very intricate. Common handle materials were bone and horn. 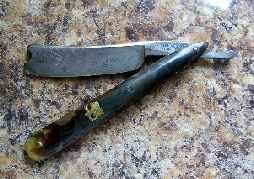 The golden age of the wedge razor. During this period some truly stunning etched blades were produced, company names began to appear on the tang and even the spine of the blade was sometimes decorated with fancy designs. Handles were made out of many different materials - Ivory, horn, bone were all used and inlaid with silver and even precious stones. A notable introduction in 1868 was the use of celluloid for scales - designs really did take off from this point! This period also saw the introduction of the 'frameback' razor, a blade with a heavy spine and the thinnest possible blade (non-removable) that gained immediate popularity. 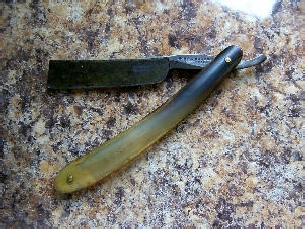 Horn-handled razor C. 1870. Note the curve of the scales in contrast to the tortoiseshell-handled example above.

Celluloid handles became extremely popular as makers discovered the huge potential of this versatile material. Sculpted and coloured scales began to be seen and this decade more or less saw the final demise of the wedge-shaped blade as hollow grinding reached its final stages.

Machine-forged blades became common, hence the appearance of blades stamped 'hand-forged' or 'hand-made' as older-style makers strove to retain sales. A new process allowed the hollow-ground blades to be etched similarly to the old wedge blades and other processes such as gold wash further enhanced the blades' appearance. 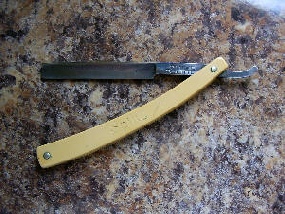 'Spike' American razor, C. 1950's. Note the square-ended blade favoured by American companies over the 'French point' (round-ended) blades preferred in Europe at this time. Also the blade is quite narrow - another typical feature of American razors of this era. (TIE collection, NFS)

Celluloid was by now used almost exclusively for scales, though the new 'Bakelite' plastic began to make inroads. By this time the hollow-ground blade profile had reached its zenith - in 1914 the firm of J. A. Henckels offered no less than sixteen different degrees of blade profile, from full-wedge to extreme hollow-ground and four blade end-shapes in ten blade depths ranging from 3/8" to 8/8"!

Straight razors were still popular up to the 1950's, although an invention in 1901 by a certain King Camp Gillette spelt their demise - until now!

Who knows if men are just fed up with paying through the nose for a bit of cheap steel set in plastic that gets thrown away after a few days or if the desire to be macho is rearing its head once more? Let's face it, if scraping off your stubble with three inches of unguarded, horribly sharp steel isn't macho, we don't know what is! Whatever the reason, there's no doubt that more and more men are now using straight razors for their everyday shave.